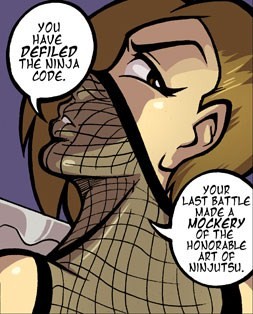 Ninja are a primarily close-combat class that wears light armour, as in the panel to the right, it often incorporates fishnet.

I wanted to add this in because I want to put this somewhere. Delete it if you see fit, however, readers, please note that I am not one of the authors, I just wanted to put this here and entered other information as compenstation. Anyway, I suspect that some of the Ninja Techniques are Summoner Techniques modified for close-combat. The obvious example is the Summoning Jitsu, which appears to be similar to what I would suspect a low-level summoning skill, excusing the Summoning Circle. I assume that 7 Dragon's summons something that looks something like seven dragons, or seven somethings that look like dragons. Also, Ninja Vanish can be considered to be a summon-self, and Mirror Image might be one of a number of things, from summon illusion-self to summon clone-self.

Another theory for Ninja techniques is that they are a hybrid branch based on both Summoner and Mesmerizer techniques. The obvious supporting example for the former has already been stated, but it is likely that a theoretical 'reverse gear' to Mesmerizer techniques can explain the altered version of Ninja Vanish l33t_ninj4 possesses, named Dramatic Entry. As it is stated in l33t_ninj4's entry, Dramatic Entry draws attention to its user, and thus may be based on the Mesmerizer ability to alter his or her opponent's perception. However, the 7 Dragons technique is unlikely to be a Summoner-based ability. Judging simply by the image in question, it is likely a powerful energy-based technique with short range, or even a one-hit weapon buff; in other words, it may be that the technique is nothing more than a last-stand strike much like Blade of the Immortal or the one-use technique Lourdes used while training with l33t_ninj4 when he was harmed during the Kaiser Wyrm battle, entitled 'Anti-Anger Management Ray'. On the other hand, it may be a Summoner-based technique, but based on l33t_ninj4's near-instantaneous use of the technique, it is unlikely; Summoner techniques generally have high stamina cost and extensive necessary preparation.

Please enter additional information in the correct spots or here.

Retrieved from "https://mysticrevolution.fandom.com/wiki/Ninja?oldid=4487"
Community content is available under CC-BY-SA unless otherwise noted.