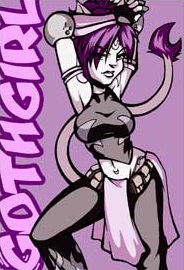 Nightmare Soldier is a high-risk, high-reward class known for the odd people it attracts. Although some abilities can be used merely by drawing upon stamina, many involve sacrifice of one's own health to use. There are other conditions for certain abilities as well, including damaging the opponent, the opponent damaging the caster, but it is certain that all of these conditions have a common element: Blood sacrifice as well as expending stamina. Once the casting conditions have been met, Nightmare Soldier abilities are incredibly powerful, but balancing damage taken and damage dealt requires incredible skill. A Chaotic alignment is likely a requirement to play this class.

So far, the only races we have seen as a Nightmare soldier are Gothgirl (a Nekko) and Krosa (an Elf ), so it doesn't look like there is a "preferred" race as of yet.

So far, no other abilities are known that a Nightmare soldier uses, aside from the ones that Gothgirl uses, since Krosa did not display any skills other than combat with his sword. Click on her link to view them.

Retrieved from "https://mysticrevolution.fandom.com/wiki/Nightmare_Soldier?oldid=4465"
Community content is available under CC-BY-SA unless otherwise noted.